Realme people seem to want to offer options for each user profile, even if it means launching similar versions of the same model. After having met several Realme 6 , being the Realme 6i and the Realme C3 , they have now presented a somewhat cheaper version (in exchange for the Realme X50 , the new Realme X50m .

now we will see with the specifications that the Specifications is very similar to the first X50, also being a mid-range mobile and maintaining the refresh rate of 120 hertz . Inside, it integrates the Snapdragon 765G , thus maintaining 5G support as indicated by the name of the terminal itself.


It is not only that the design is familiar to us, it is that it is traced from the first X50 . This does not stop being the logical thing, being a more moderate version of the same terminal so that it represents an option that is as similar as possible but somewhat cheaper.Thus, we also see that rear with an apparent gradient and perforated screen . It is probably the same box as the Realme X50, considering that the dimensions are exactly the same. 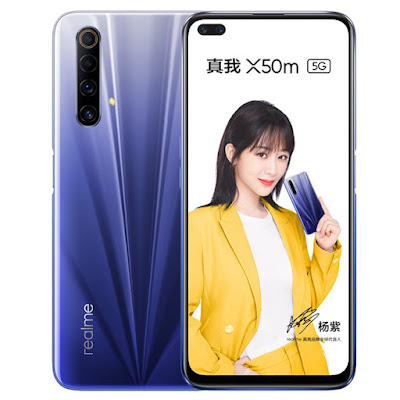 That perforated panel is a 6.57-inch IPS screen with Full HD + resolution, which leaves the fingerprint reader on the side and has quite thin frames (except for the usual chin). Although what stands out is that being a more basic terminal than the previous one, it maintains those 120 Hz.

Up to 8 GB of RAM for "the little brother" Something that the X50m does not give up is the processor and 5G support, as we said at the beginning. The Realme X50m maintains the Qualcomm Snapdragon 765G , so in terms of power it is tied with the previous one, although it remains in 8 GB of RAM (and not 12 GB as the version without "m").The internal storage is 128 GB,

In the back, the mobile offers four cameras with that configuration that we see so much in Realme smartphones: a standard and main lens, the wide angle, a macro lens and a monochrome sensor. Of course, the main sensor is 48 megapixels , with one of 8 megapixels for the wide angle, a 2 megapixel sensor for the macro and another monochrome 2 megapixel.In the front camera we see a 16 megapixel sensor, but it does not go only as could be intuited in the design of the screen. It is accompanied by a 2 megapixel lens for depth analysis and to provide blur calculation.


Versions and prices of the Realme X50m

At the moment the launch of the Realme X50m has been produced for the Chinese market ) and no dates have been set for its international release. There are two versions available depending on RAM and two colors, blue and white, with the following starting prices: