Samsung's most powerful tablet would follow the path of the rest of the flagships and also receive a Lite version have been almost daily for a week, and now Samsung has finally revealed all the details. Thus the new Samsung Galaxy Tab S6 Lite is born .


As its name suggests, the Samsung Galaxy Tab S6 Lite is a more modest version of the Tab S6 , but it maintains some features such as the screen, the battery or the S Pen support . Let's see what this new tablet offers us.


In the tablet market, there is rarely a middle ground. There are them with good materials and expensive and cheap that look like toys. The Samsung Galaxy Tab S6 Lite is a little intermediate point, and is that, although its price has not been confirmed (it is rumored that the figure will be 439 euros in Europe), this tablet maintains the metal body , similar to the normal model , although with the big difference that there is now a single camera behind.


One of the great protagonists of this tablet is the S Pen with different pressure levels. The S Pen is also compatible with the Samsung Galaxy Tab S6 Lite and can be safely carried on the tablet with its magnetic connector.


For multimedia entertainment, the 10.4-inch LCD screen with 2000 x 1200 resolution takes all the limelight from the front, without any perforation or notch that gets in the way of series or games. This Lite version also has stereo speakers.

Of course, the surname Lite represents a drop in power, and we went from the Snapdragon 855 of the normal version to a quad-core processor at 2.3 GHz and 1.7 GHz, possibly an Exynos 9611 . The amount of RAM available is 4 GB and the storage is available in two flavors: 64 GB and 128 GB, expandable through microSD cards.

In the photographic field, the Samsung Galaxy Tab S6 Lite is left with a somewhat basic configuration. It has a 5-megapixel front camera and an 8-megapixel rear camera . The tablet does not have NFC connectivity and Samsung does not mention a fingerprint reader, so it is presumably that it does not have biometric access or support for Samsung Pay. 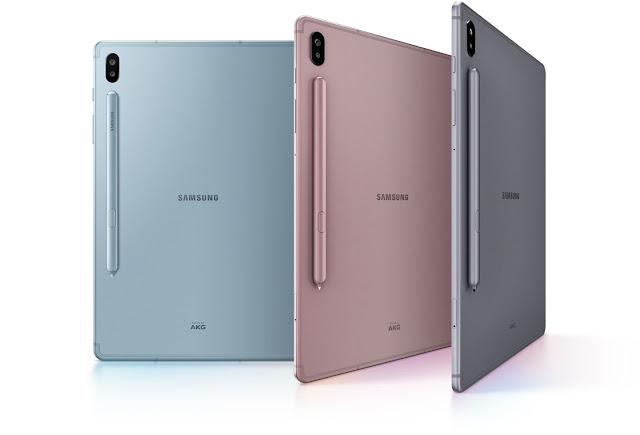 
At the moment, Samsung has announced the Samsung Galaxy S6 Lite in Indonesia, although it is expected to be sold in other regions, including Europe. It seems that it will be sold with 4 GB of RAM and versions with 64 and 128 GB of storage, in the colors black, blue and pink . Its official price is currently in the air.