finally Samsung has announced that its existence is now fully official. The Samsung Galaxy A21s arrives to join its catalog of medium ranges, in the strip in which its economic mobiles move. A new device for Koreans to continue competing in the market area with the most aggressive prices and models.

As expected thanks to what we knew from previous leaks, the new Galaxy A21s takes advantage to incorporate more cameras to the set, thus having four sensors located on the back . But the characteristics of the Galaxy A21s do not only remain in the cameras, let's see the whole of the new creature of the Korean builder. 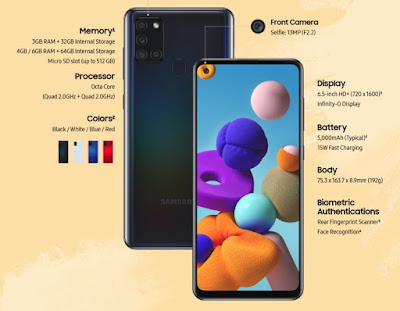 The new Samsung Galaxy A21s has been announced by its manufacturer through an infographic that leaves some data out, but still offers us a fairly complete perspective of the device. For example, we know that it has a 6.5-inch screen with HD + resolution of 1,600 x 720 pixels and that it is perforated in the upper left, an Infinity-O LCD.

The processor chosen to move the equipment is an unknown model, but we do know that it has eight cores, that it runs at 2GHz and that it provides a fast 15W charge to its considerable 5,000 mAh battery

The Samsung Galaxy A21s lands with dimensions of 163.7 x 75.3 x 8.9 millimeters, a weight of 192 grams, four colors to choose from and a fingerprint reader embedded in the back of the phone, thus completing biometrics with facial recognition . For connectivity we have 4G, WiFi, Bluetooth and GPS, in the absence of more data from the manufacturer. 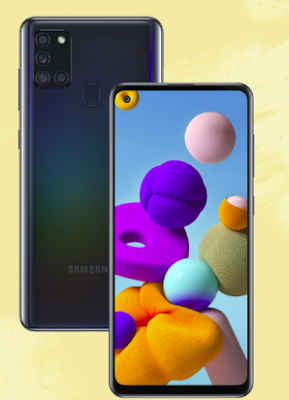 Versions and prices of the Samsung Galaxy A21s 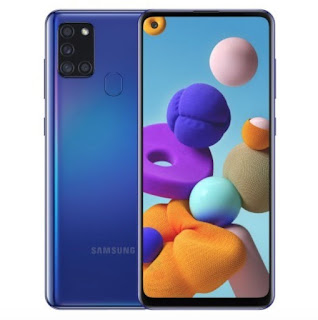 Samsung presents its new phone in four colors to choose from ( black, white, blue and red ) and puts it into circulation in three available memory options. We have it with 3GB and 32GB, with 4GB and 64GB and finally with 6GB and 64GB. The launch, unfortunately, has not been accompanied by official prices, so we will have to wait for the announcement in the different territories of the brand to get to know them.price of the phone is €200